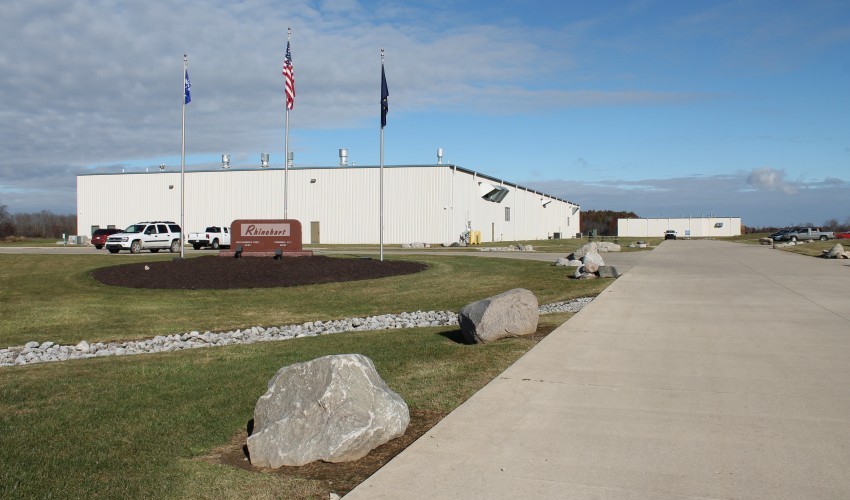 History of the Rhinehart Companies

Since 1945, Rhinehart has been making top-quality products for its customers all around the world. John R. Rhinehart started this company in Fort Wayne, Indiana by creating Calf-Teria, Inc. to manufacture his patented calf-feed pail to farmers nationwide. The pail became popular and its success led to an expanded line of farm-related items. The business was so successful that John had to move from Fort Wayne in order to expand. In 1956, he bought land just north of Fort Wayne in Spencerville, Indiana. Adjacent to the Norfolk Southern Railroad line, the new location was convenient for both farmers and distributors in the surrounding areas.

John Rhinehart decided a name change was in order so that all his products could be encompassed under one entity. He chose Rhinehart Development Corporation. His son, Philip R. Rhinehart, soon joined the company and they continued to expand their influence in the small farm and agricultural-related market across the country. Philip brought a fresh set of eyes to the company and, with John's help, they developed new products and services for the growing business and expanded into commercial manufacturing.

In nine months, Rhinehart Development Corporation had a new 30,000-square foot building and had expanded its offerings from farm-related fabrication to include the commercial building industry. This move proved brilliant — sales steadily increased and the name became associated with high-quality fabrication and metal stamping. In 1986, Rhinehart began making parts and components for many government prime contractors, and this further solidified their niche in the marketplace.

With the passing of the late John R. Rhinehart in 1999, Philip took the reins of the company. Many items manufactured at Rhinehart Development required metal finishing to yield the final product. A majority of the fabricated products were being outsourced to locations where powder and liquid coating operations could take place. The increasing costs of freight and labor proved to be an unreasonable expense to the business. In order to maintain a competitive company, Philip envisioned a sister company to Rhinehart Development that would specialize in metal finishing.

With the help of Don McDaniel, now Vice President & General Manager, Philip took the leap into the metal finishing industry in 2000. This company, named Rhinehart Finishing, LLC, offered the coating services to customers that Development had previously outsourced. The new company was built right next door to Rhinehart Development Corporation.

With 48,000 square feet of production space, Rhinehart Finishing, LLC was able to build a state-of-the-art facility that delivered customers the highest quality finish in the nation. The company quickly became a leader in phosphating, powder coating, liquid spray paint operations and custom masking. This facility offered a service unique to the industry — phosphating pretreatment immediately followed with powder or liquid coating on a computerized conveyor system. This technology opened up new markets for Rhinehart Finishing, including military, automotive and commercial.

On August 12, 2002, less than a year after opening, the company passed another milestone. Rhinehart Finishing management worked diligently with the U.S. Department of the Army to be awarded the Tank Automotive & Armaments Command (TACOM) certification, and surpassed 120 cycles of the GM 9540 test — three times the requirement for the certificate. This signified that the company’s zinc phosphate procedure met the TACOM "Performance Standard for Combat Grade Powder Coat Paint" and had already surpassed the required specifications for meeting the five-year, real-time performance requirement that is specified in scores of TACOM contracts (40 cycles of GM 9540P, Enhanced CARC). This proved that the newly formed company had the best metal finishing business in the nation.

As its reputation grew and business became increasingly busy, Philip R. Rhinehart saw the need for an expansion of the Rhinehart Finishing facility. The current 48,000-square feet of production space was not enough to handle all the business from around the country. In the winter of 2005, Rhinehart Finishing began its expansion into a 24,000-square foot building that sat just behind the current building in Spencerville. The new facility was equipped with an advanced conveyorized paint system that utilizes four paint application booths and a large conventional oven, ensuring that customers receive the highest quality in the most efficient manner. Rhinehart has recently increased their footprint by building and extra 28,000 square feet of production space, to bring the total for Rhinehart Finishing up to 100,000 square feet of production space on the Rhinehart property.

Quality System Certification
Rhinehart Finishing, LLC is proudly certified in the ISO system by BSI, the business standards company devoted to embedding excellence into the way people and products work. Our ISO 9001:2008 certification was awarded in 2012 in the area of Electrostatic Powder Coating and Wet Spray Coating of Various Products.

"Truly a professional organization: courteous, helpful, always putting quality first. A pleasure to do business with."